It was invented by Benjamin Thompson, Earl of von Rumford, in 1795 for the army of Bavarian Elector Karl Theodor von der Pfalz. Native Americans were all-round geniuses. He reformed the Bavarian army, invented energy-saving kitchen stoves, developed functional stoves, fireplaces and lamps, laid the foundations of English gardens, and established kitchens for the poor. It was there that the rumford soup he invented was served. Originally the simplest version, Rumdford soup was made from barley and dried peas. At that time, potatoes were not very common in Bavaria and were rejected by the population. Rumford secretly added it to the soup until the poor got used to it. As they loved the soup, potatoes became an official part of Rumford’s soup. This made a soup that previously cost three pennigs cheaper to one pennig.

Since then, the recipe has gone through many modifications.

Here are recipes from Slow Food Germany, an association of conscientious connoisseurs who have provided excellent service to many of the old recipes. 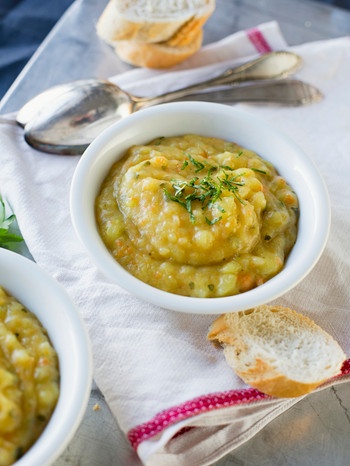 Soak dried peas in 1 liter of water overnight. The next day, cook until al dente in the soaked water and, at the end of cooking time, carefully add only salt. Then drain and drain well.

In the meantime, wash the chives thoroughly and chop them finely. Peel the carrots and parsley roots and cut into small cubes. Stir-fry the remaining refined butter for about 5 minutes, then add to the soup. Season the soup with salt and pepper.

Cut juniper ham into narrow strips and divide into 4 preheated soup plates. Pour the soup over it, sprinkle with spices and serve immediately.